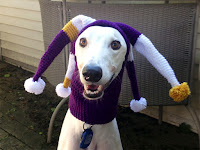 In honor of Yardo's birthday, today's run has been declared a silly hat run by the GM, following the success of last nights hatted event at Oscars. In a further revolutionary move, there will be a BBQ, Oops! a Braai available after the run so if you want to bring along some food to cook, then feel free. The Braai which has been donated by Curry in a Hurry who will be bringing along some chicken to grill, will be available for future hash events on demand.
Posted by Egg at 9:28 AM