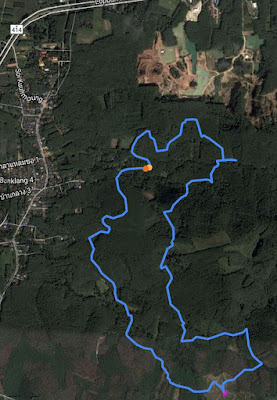 Here. courtesy of Little Tool, is the track for yesterdays much appreciated In-U-Endo run, which was almost exactly 7k and with the beer stop included, Little Tool timed it at 1hr 24mins. The orange and yellow blobs are the run site and the beer stop is the purple blob at the bottom. A quick pass over Google Earth suggests that the run only got over 100m once, emphasizing how much good country there is in the area without trailing all the way up the hills. Good Haring!

The short run seemed to bring satisfaction except to SuperPig and Squealer who high tailed it back from the run site after the first climb. Egghead continued his current inability to follow a trail, getting lost on the final descent to the run site which also fooled the late arriving Stick Insect who managed to do the short run even working out the switch in the paper all by himself.

Another small but meaningful turnout, but then everybody went out and did some sort of run, so maybe we've just lost all our beer truck guardians (whoever they may be!) On on to HH3 today which will be followed by a small run-site gathering in honor of Superpig's birthday, retimed from tomorrow leaving the coast clear for Keeling's farewell party at Oscars from 2:00 p.m. tomorrow when we will all be able to (legally!) drink beer again.
Posted by Egg at 10:01 AM