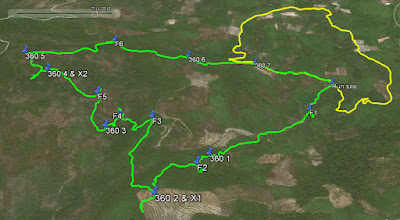 As the GPS file will confirm, the long run with all the F's and X's was 6.7k, and without them it was a mere 5.5k, and anyone who had had a mind to, could have short cut the ass out of the run simply by following the well-worn trails around the top of the valley, which we have all run a hundred times. But sadly with a pack of only 7 people there were simply not enough people to check, with the result that the run took 2 hours to complete by a pack who made their views plain by refusing to so much as talk to the hare afterwards. Such is life.

The short run in contrast came back happy which is surprising as the live hared run was 4.4k and had a total ascent of 127m which is unusual for a short run. Ok, it didn't even come close to the long run's 400m nor did it's high point of 125m rival the long run's 288m; but still...

But the comments that were made today were correct, if we have to plan runs for small packs then checks have to be quite easy and we probably need to stick to trails. But what happens if we suddenly have a larger pack as could have happened today?