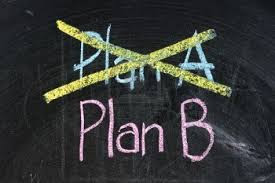 If you are going to this weekend's HH3 outstation run in Phattalung, then read no further (well, you can if you want!)

But if you aren't then there is a plan B as SH3 will be organizing a couple of runs for a bunch of visitors from the Royal Klang Club H3 on Saturday and there will therefore be a parallel SH3 run for anyone who wants to join. A couple of points though: the visitors have asked for two runs, a medium and a short by our standards, although the medium run will not be a lot different from one of our more modest long runs.

Secondly, there will be no beer truck but there will be water provided for SH3 runners (our visitors are organizing their own drinks) and also beer on sale at 40 Baht a can, i.e., for this week, no tokens.  That means that anyone needing transport should let the hares know as Little Tool now has a pick-up and will be meeting our guests at the junction of Th. Sadao and Th. Rajadamnoen near the stadium at 3:30 p.m. to guide them to the run site. Finally, the run will start sharp at 4:30 so please do not be late as RKCH3 want to get away early for a dinner date on Ko Yo.

Details are:
Songkhla Hash House Harriers' run #1972, Saturday, April 27, 2019, 4:30 p.m.
Hares: Egghead and Little Tool
Misdirections: From the Ko Yo intersection take the new Hatyai road for about 8.3k and turn left by the True Moves tower then follow the track to the run site in the rubber at  7.102465° 100.517355°. From Hatyai either turn left at the Nam Noi traffic lights on Kanjanawanit Road and go 5.3k then turn right opposite Wat Srisatkiree, or if approaching via Lopburiramesuan Road go about 2k past the Nam Noi turning on the right and do a U turn, then follow hash signs etc. as for Songkhla above.

As far as is known there is no alternative HH3 run on Sunday afternoon so if you ain't kayaking in Phattalung, you have a free Sunday!
Posted by Egg at 5:33 PM No comments:

Check out this visualization of yesterday's long run ...

Superbob to the rescue

A late case of hare-loss this week, but no problem! Our super-sub Not the Full Shilling with his faithful sidekick Worm have stepped into the breach to set this week's SH3 run alongside the lurch-left Little Tool.
Details are:
Songkhla Hash House Harriers' run #1971, Saturday, April 20, 2019, 4:30 p.m.
Hares: Little Tool, Not the Full Shilling and Worm.
Misdirections: From the Ko Yo Intersection, take the old Hatyai road for 4.7k and turn left for 6k to the Tha Kham crossroads. Turn left and head east for 2.7k then turn right for about 200m to the run site at 7.035976, 100.597454. From Hatyai get to Tha Kham and head east for 2.7k etc. 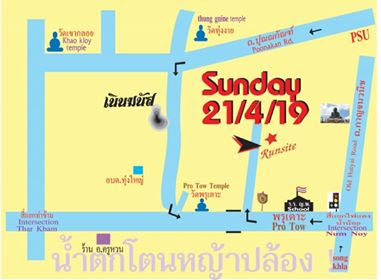 For those who like it spelled out: From the Ko Yo intersection, take the old Hatyai road for 10k and turn left at the Nam Noi traffic lights for 2k then turn right and follow the concrete road for about 1.5k to the run site on the right. For Hatyai based runners, take Kanjanawanit road to the Nam Noi traffic lights and turn right for 2k, etc.
Posted by Egg at 3:52 PM No comments:

Hatyai HH3's outstation run this year will take place between Friday 26th and Sunday 28th April and will be at the Wang Wa Dee Resort in Patthalung. If you are not yet registered but would like to attend, can you let HH3 know TODAY (Wednesday, 17th April) or if you don't know how to contact them you can register your interest by adding a comment to this post and I will pass it on.


The cost for all three days including food, beer etc. is 1000 Baht for active runners with kids under 12 yrs, 500 Baht, and returning or new runners 2000 Baht. If you decide to go, could you also indicate if you want to go kayaking on Sunday morning (which is included in the price) or if you will give that a miss! 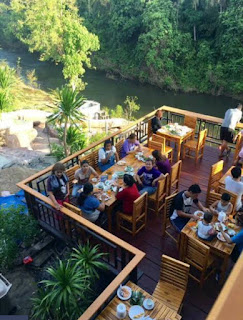 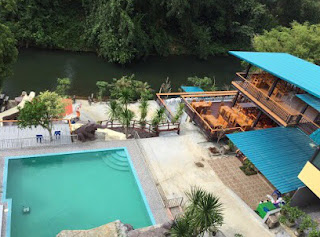 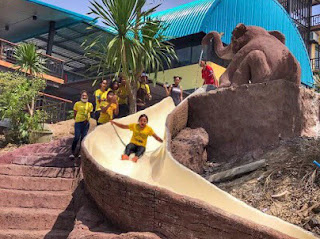 Just a gentle reminder that today's HH3 run is timed to begin at 3:30 p.m and the run site is at the football field in Poonakan at 7.010429° 100.548627°. HH3 request that we (SH3/HH3) wear a yellow T shirt to aid recognition, so if you have the special T shirt for this run (which is either green or blue) please save it for another occasion! If you have ordered and paid for the T shirt, see Egghead who is holding all those T shirts not already given out. If you  paid your registration  fee on Tuesday then just turn up and act like a hasher. If you haven't registered then see Eeyore as usual and cough up 60 Baht for named runners, and whatever is the amount being demanded for guests!

Finally, thanks to everyone who made the effort and turned out at what was probably our biggest Songkran run ever (123 registered runners). Miraculously despite some confusion about exactly where the beer stops were supposed to be, resulting in some impromptu ones being added, the beer didn't run out until the 7th, located just round the corner from Srisuda Road. The run itself took the best part of 3 hours to complete but no one was complaining and as a result, most of the food at Oscars disappeared quickly and had to be supplemented by that eaten at a rather more leisurely pace at the Hot Bread Shop. Thanks to Kan Kai and Hot Buns, and Toolbox and Little Tool for hosting the lunch and to Only a Yolk and Little Tool for producing enough food to feed a small army. Thanks also to Conebrain and Little Tool (who gets in just about everywhere!) for setting the run and to Yardstick for organizing the beer truck and the water which kept us all in ammo. Does anyone have any photographs?
Posted by Egg at 8:21 AM No comments: 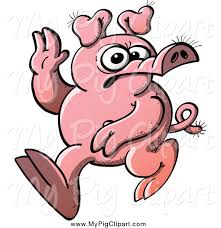 This week's SH3 run which falls on the first day of Songkran is  a town run at which we will be joined by two sizable groups of runners from Malaysia, one from Miri in the eastern bit and one from KL The run site is in Srisuda road in Songkhla in the general area of Oscars/Hot Bread Shop and lunch will be served at both venues immediately after the run finishes, projected to be at about 1 p.m. Could anyone attending please make sure that they wear a hash shirt to aid identification although everybody registering will be given a badge of sorts to help the staff in the bars and the helpers on the beer truck recognize genuine hashers

Registration for everyone other than the two groups of visitors (who will have already paid) will take place from 10 a.m. at the front of Oscar Bar where there will also be water available before the run. On the run there will be a number of beer stops at which there will be free beer, soft drinks and water, both to drink and also to fill up your water guns. However this will all be strictly for registered runners so if you don't register there's no beer and no food afterwards! Finally, again for registered runners only the two bars have agreed to sell selected beers at 60 Baht a can/bottle so please stay around long enough to give them a bit of custom as a thank you for hosting the lunch for us.
Details are:
Songkhla Hash House Harriers' run #1970, Saturday, April 13, 2019, 11:00 a.m.
Hares: Conebrain and Little Tool
Misdirections: Srisuda Road may not be directly accessible to road traffic so park in the general area  and walk to 7.204374° 100.592431°.
Registration: Named and local SH3 and HH3 runners:100 Baht. New runners and guests: 400 Baht.

HH3's run on Sunday will also be graced by our Malaysian friends from Saturday and will feature long, medium and short runs to suit all tastes. The hares are too numerous to mention but the run site is at 7.010429° 100.548627° alias the football field at Tungnai on Thanon Poonakan. If you haven't already booked a T shirt then it is probably too late to do so now. If you have ordered one then contact Egghead as he almost certainly has it! However, HH3 have asked all local runners if possible to wear a yellow (hash) T shirt to aid recognition and eligibility for whatever they have planned.  Named HH3 (and apparently SH3) runners 60 Baht,  new  and non-named runners subject to negotiation! The run starts at 3:30 p.m. so please be there a bit early or risk setting off late and having to be rescued.
Posted by Egg at 9:10 PM No comments: 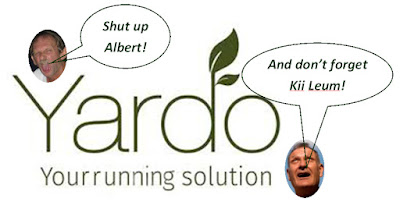 This week's SH3 run is being harmoniously set by Yardstick and Kii Leum, for both of whom there seems to be some possibility that this Saturday may be their last proper run for a while as both have imminent plans to depart for more rewarding shores in the next couple of weeks.
Details are:
Songkhla Hash House Harriers' run # 1969, Saturday, April 6, 2019, 4:30 p.m.
Hares:Yardstick and Kii Leum
Misdirections: From the Ko Yo intersection take the old Hatyai road for 4.7k and turn left for 6k then turn left at the Tha Kham crossroads for about 4.2k and turn right into the rubber opposite the big vacant moonscape on the left at 7.039614,100.609073. Alternative routes via the old Yala road are available and from the big tree the run site is 1.8k on the left heading in the direction of Tha Kham. From Hatyai get to Tha Kham and head east for 4.2k etc.
Scant tidings of the HH3 run on Sunday but they will be appropriately added when they emerge. But don't forget that next weekend will be Songkran and the SH3 run will be a town run starting at 11:00 a.m. with lots of beer on the run and lunch to follow. As usual we have a big crowd of visitors from Malaysia joining us and they will also be at next Sunday's HH3 run of which more details next week.
Posted by Egg at 8:31 PM No comments: