Instructions for the weekend

...which crudely is what the hash has to offer this weekend with SH3 and HH3 following the tried and tested formula of run-party-repeat!
Saturday's SH3 venue is Not the Full Shilling and Worm's residence in Poonakan as they set the final run of 2019, with a casual gathering afterwards to round off the year for SH3.
Details are:
Songhkhla Hash House Harriers' run #2007, Saturday, December 28, 2019, 4:00 p.m.
Hares: Not the Full Shilling, Worm and Mai Dtem Baht
Misdirections: From the Ko Yo intersection take the old Hatyai road for 4.7k and turn left for 8k then at the Wat Keow Kloy traffic lights turn right for 1.3k to the run site inside the big gates on the right at  7.023149° 100.568478°. Click here for Google Maps' pin. From the other end of Poonakan the turning into the big gates is at 9.7k and is on the left.The gathering after the run is a BYO affair so either buy beer from the beer truck or equip yourself with a contribution to the eskie once the beer-truck has been drunk. Likewise food: all contributions gratefully accepted.

HH3's end of year party is at the old Caltex station at the northern end of the second Tinasulanonda Bridge (from the Ko Yo intersection, head towards Ko Yo and go 9.5k across both bridges and turn left into the gas station at 7.200939° 100.552546° - click here for Google Maps' pin). There are lots of beer sponsors already but don't let that put you off bringing a bit extra. Ditto food - the more the merrier. Registration is the regular 60 Baht and if you feel like dressing up for the evening, the theme is what you wore when you were young. The run itself will start at 3:00 p.m and there will be plenty of room to camp out at the run site if you don't fancy the drive home afterwards.
Posted by Egg at 5:30 PM No comments:

Sartorial guidance and HH3 this week

The end (of the year) is nigh 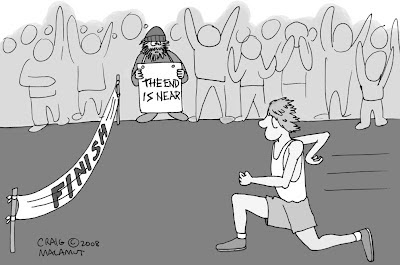 Well almost; this week sees SH3's penultimate run of 2019 which has been declared a red run, as in please wear as much red as possible in keeping with the general Christmas theme.
Details are:
Songkhla Hash House Harriers' run # 2006, Saturday December 21, 2019, 4:00 p.m.
Hares: Sex Sprinter and Buk Toy
Misdirections. From the Ko Yo intersection take the old Hatyai road for 4k and turn left at the Kuan Hin traffic lights. Go 5.2k and turn left opposite the temple arch at Wat Borogam for 500m to the runsite on the right opposite the big sala at 7.074643°N 100.606273°E. Click here for Google Maps pin. From Hatyai, the Kuan Hin lights are 6k beyond the Nam Noi traffic lights and the turning is on the right. (Alternative routes via Tha Kham available on request. Just leave a comment below.)
Sunday's HH3 run details have yet to be announced so will have to follow. Meanwhile for those of you who didn't know, the Hot Bread Shop has for the time being closed so the Hash bar will transfer to Oscars Bar with immediate effect from which the beer truck will in future depart. Coincidentally, they will be holding their Christmas party next Tuesday, Christmas Eve (December 24th) details of which will no doubt be posted here when they too are available.
Posted by Egg at 9:51 PM No comments: 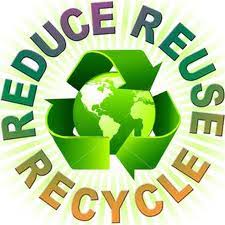 4R's? Surely I mean 3R's!
But no, this week's SH3 run will put into practice all three of the 3 R's and will add a new one just for good measure: it will reduce the length of the run, reuse part of the directions from last weeks run' and recycle some bits of previous runs, plus it will revisit some trails that we haven't run in quite a while.

Details are Songkhla Hash House Harriers' run #2005, Saturday, December 14, 2019, 4:00 p.m.
Hares: Egghead Lot Rakaa and Harram
Misdirections: from the Ko Yo intersection take the New Yala road for 800m and turn left for 400m  to the run site on the left at 7.127017°N  100.588514°E. Click here for a Google maps' pin. If you are coming from Hatyai you will need to go across the intersection and U turn at the first opportunity then come back to the intersection to turn left. There will be a sponsored beer stop and some food as well after the run provided by the hares so do try to come along and help one of them to celebrate whatever it is that he is celebrating!

Sunday's HH3 run is out at the big quarry on the new Hatyai road. From The Ko Yo intersection go about 7.5k up the NHR and take the left turn just after the Korakot Restaurant by the hash sign and follow the track into the run site in the quarry. From Hatyai head to the Nam Noi traffic lights then take the road on the left leading across the NHR for 5.5k and turn right at the Hash sign just after Wat Srisatkiree. Then follow the road until you see signs of a runsite on the right. The hares are....deep breath... Sex Kapook, IT UT, Beanie, Tanakorn, Jintala and Cooker plus the unnamed guy second from the left on the map below. 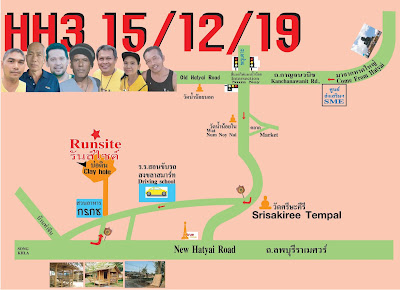 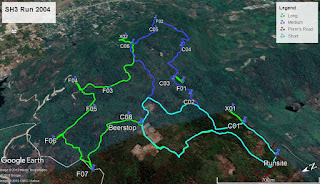 Posted by Yardstick at 11:54 AM No comments: 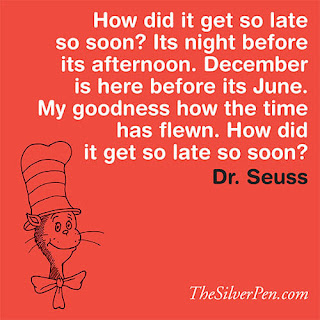 Yep! Another year is in the home stretch  and for once the SH3 hareline is looking healthy with our 4 most regular haring combos lined up to set the runs for the rest of the year. First up is the lately returned Yardo who will be picking up where he left off prior to his departure with a run above Prem's place. Details are:
Songkhla Hash House Harriers', run #2004, Saturday December 7th, 4:00 p.m.
Hares: Yardstick and Conebrain
Misdirections: from the Ko Yo intersection take the New Yala road for 800m and turn left then follow the road as it bends right and then left past Prem's Place for a total of 2.7k to the run site at 7.1179°N 100.5988°E. Click here for a Google maps pin. If you are coming from Hatyai you will need to go across the intersection and U turn at the first opportunity then come back to the intersection to turn left.

Sunday's HH3 run is being set by the Egg tribe and is from the football field at Sai Kao (7.033355°N 100.624659°E - click here for Google Maps pin.) Map below, or, if you prefer, get to the big tree either 3.5k from the OYR 16k right turning or from Tha Kham about 6k east, and turn into the village (left from the OYR or right from Tha Kham). Go straight ahead after 150m and follow the road for a further 650m. As long as it's reasonably dry, park on the old (grass) football pitch as the concrete pitch seems to be regularly used for its intended purpose. And please try to be there at 4:00 p.m. as the run needs to start on time. Say no more!

Finally, The last quiz night of 2019 will take place on Friday (6th December) at Oscars Bar starting at 8 p.m. with Stick Insect setting the questions so please come along and give him hell if he gets it wrong and buy him a beer if he doesn't! 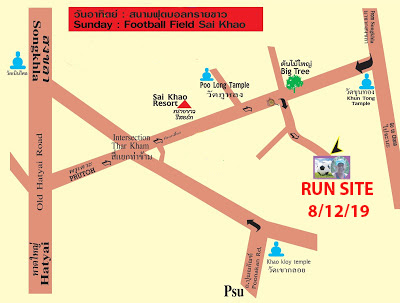 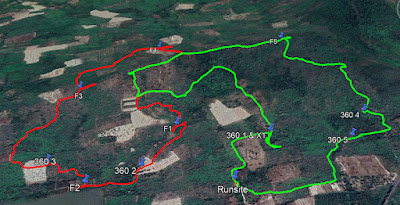 Here is the SH3 run from Saturday rendered in dear old Google Earth format, showing the 4.3k short run (green) and the 6.8k long run (green-red-green, going in a vaguely clockwise direction. Both runs were completed in a little over an hour, reached the same high point of 167m and didn't cause anyone to fear for their lives or worry about getting home to their own beds that evening. 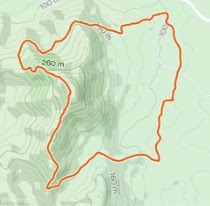 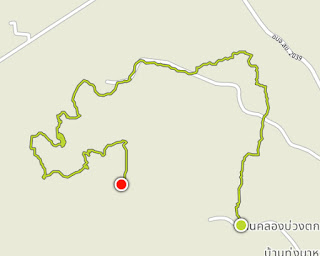 Clearly there is a difference in that the Long run appears to be an A-B, but actually most of the long runners completed the trip down the new concrete road to the run site which is indicated on the short run map above. The short run was recorded as 7.3k with a total ascent of 391m and reached a peak of 367m. The run started promptly at 4:00 p.m. and the first of the short runners made it back just as dusk was falling with the final stragglers arriving at about 6:40 by which time it was completely dark. Happily they had been advised by the hares to carry handlights!

The long run meanwhile, after following the short run for most of its course dived off into the never-never land on the right about half way up the hill, went down, then up, then down again and finally up the steep bit of Khan Lao, some of it with the aid of a rope, accumulating a total ascent of 591m and a trip as far as the beer stop of around 8.5k. At that point there was still a 2k trip down the hill to complete. However, our intrepid reporter Kai Ping, having left the main trail rather later than everyone else on the long run, got a bit lost, tired and confused and was eventually located by some of the other runners and guided the rest of the way up to the beer stop in just under 2 1/2 hours, then sensibly got on the beer truck for the trip down the hill without recording it on his GPS watch.

Full marks to everyone who ensured that no one was left out in the jungle and for the immense effort that the five hares went to in setting the long run in what has to be some of the most inhospitable country you are likely to encounter hashing in Songkhla.
Posted by Egg at 1:54 PM No comments: