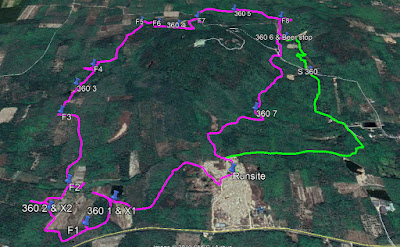 Here is run 1981 which with only 6 humans and 3 dogs on the long run and at 8.4k all-in (about 7k without all the F's and X's) took the pack the best part of 2 hours to complete. Meanwhile, the fleet-footed short-run pack, consisting of 7 people and 2 dogs, who alternated on the two halves of the run, were all at the beer stop within about 30 minutes and completed the 4.5k or so in around an hour.

The highlight (or low point, depending on how you look at it) of the long run was the trail out of the valley after the 4th 360 which required two of the dogs to be carried, with the result that the trail over some old felled timber gave way allowing at least two of the packs to slip through to the rocks below.

But the main slippage of the day was in our numbers which are again tending to fall towards the level where potential hares are starting to think, what's the point? This particular run took 2 long recces and 2 outings to lay and poor old Lucky who was present on all of them was too tired to even contemplate actually coming to the run lest she might be asked to do any more work! Her absence plus the absence of the third hare, Palm Job, who is forgiven since he provided the copious beer for the 2 beer stops, and the absence of pretty much the whole of our normal HH3 support, meant that the work that went into trying to lay a challenging run simply resulted in the small pack having to struggle to get home before dark. Which was a shame because those who came clearly enjoyed the experience, as, with the exception of the early departing Nosin, everyone stuck around and enjoyed Only a Yolk's Kao Soi and the good humored circle that followed, and the party only broke up at around 8 p.m.

Ok, so the moral is that everybody (well, almost everybody) has lives outside the hash, but it would be kind of nice if they could be organized so that Saturday late afternoon's and early evenings (and we're only talking about 2 or 3 hours here) could be kept sacrosanct. No one objects if people have to leave early to fulfill social duties but at least try and come along and do the runs to make the hare's efforts worthwhile,

Today's HH3 runsite has changed and is now at the top of the road above Wat Prutoh as shown in the map below. Based on the previously published directions, if coming from the Prutoh end of the PT-Tungnai road turn right after 300m immediately before the Or Bor Tor office and then follow the road around the village and up the hill for about 2.3k to the runsite at  7.025286°100.532241°. If you are coming from the Wat Tungnai end of the road, the turning is about 2.9k on the left and is immediately after the Or Bor Tor. 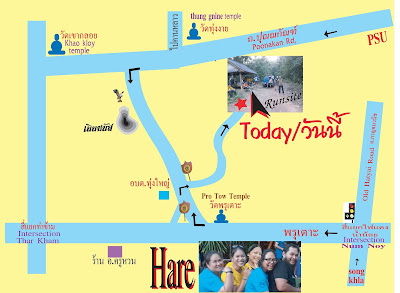 Not the New Yala Road! 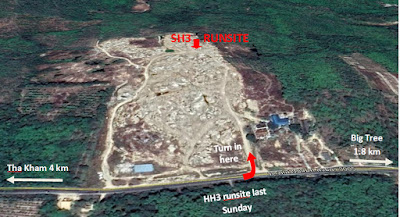 For reasons too complex and painful to go into, this Saturday's SH3 runsite has shifted and will now be on that thoughtfully landscaped piece of real estate next to the Sai Kao Resort, immediately opposite last Sunday's HH3 runsite. Details are:
Songkhla Hash House Harriers' run #1981, Saturday June 29, 2019, 4:30 p.m.
Hares Egghead and Palm Job
Misdirections: From the Ko Yo intersection take the old Hatyai road for 4.7k and turn left for 6k then turn left at the Tha Kham intersection and go approximately 4.1k. Turn left onto the vacant lot where the hash sign is positioned (unless you are driving a Sherman Tank, in which case you may be able to get up via the first entrance!) Follow the track up to top end of the lot to the run site at 7.042412, 100.609020 or if you prefer, park anywhere off the track after you pass the resort on the right and walk up the rest of the track. From Hatyai, get to Tha Kham and head east for 4.1k etc.

Sunday's HH3 run is a mostly pussy thing, with Sexy Cop, Budokan, Eeyore, Payabahn and possibly others laying the run from the Prutoh-Tungnai Rd. and Grizzly acting as bodyguard. From Poonakan, turn at Wat Tungnai (5k from Wat Keow Kloy on the right, 6k from the other end on the left) and go 2.8k to the runsite on the right at 7.029176° 100.545478°. Alternatively, get to the Nam Noi traffic lights and turn left (from Songkhla - right from Hatyai) and go 3.6 k then turn right at Wat Prutoh and follow the road for 1.4k to the runsite on the left, Too hard to follow? A map will be posted as soon as it arrives!

Before that of course, on Friday evening (June 28, 8:00 p.m.) There is a quiz night, when Little Tool will be filling the dual roles of host and quiz master at Oscar's Bar. Sounds like there could be a bigger turnout than of late with a number of semi-regulars already committing to come along, so do please try and join them.

For those coming to the HH3 run this afternoon, please be at the runsite before 4:15 as they are intending to start the long run at that time. Guess that means it's going to be a long 'un so we might get our monster on after all! 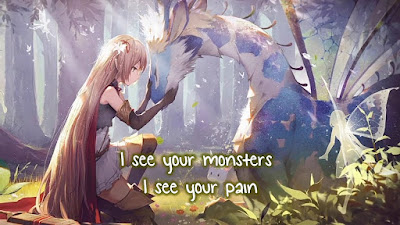 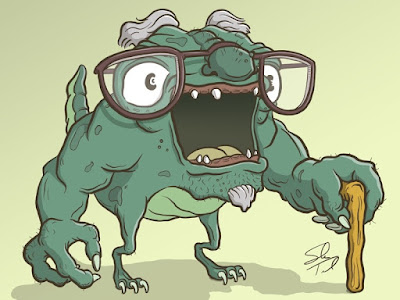 Time was when we all used to look forward to the midsummer monster, when Beavershot would go out and set us a run which would take the whole afternoon to do and we'd still get back in time for the circle. Well, it's that run again; but the old monster is not looking his best these days as he struggles with his aging knees/back/ankles etc. So Saturday's SH3 run will be a kinder gentler sort of monster... unless of course anyone fancies a 12k run - it could be arranged!

Sunday's HH3 run details are as per the map below and the run will be set by Sound Chef, ITUT, Beanie, 48 and the other guy on the right whose name escapes me! 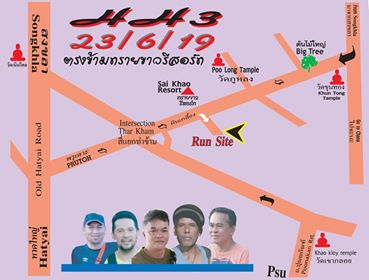 Or if you prefer your directions in English: from the Tha Kham intersection, head east for 4k and turn right opposite the open area next to Sai Kao Resort to the runsite in the rubber at 7.039365° 100.609152°. 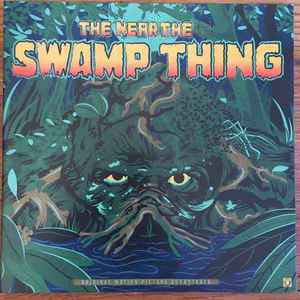 This week's SH3 run is being set by that nice Mr Gan Yao, who has cast aside his Big Foot alter-ego for a week and become...da da da daa! Swamp Thing!
Details are (and I quote)
Songkhla Hash House Harriers' run #1979, Saturday June 15, 2019

Time: June sometime, around 16:30
Hare: Gan Yao
Indirections
Start from where you are. From the Koh Yoh intersection (which must be the most commonly used words in the English language, apart from perhaps (following loud slap) ‘stop it!’ and ‘Boris, you’re a dick!!')From the Koh Yoh intersection take the New Hat Yai road for 9.9 km and turn left at the sign. Follow the track,   bear  right at 0.8 km and  at 1.1 km, park next to Captain Velocity Swamp Thing©’s Toyota Starship and think….. ‘does this guy know what to do with paper?’ (N07 04.983 E100 30.336)

From Hatyai either take the left turn at the Nam Noi traffic lights on the old road and follow that road for about 5.5 km, all the way to the new Hatyai (lopburiramesuan) road then turn left for 1.7 km then turn left at the hash sign: or take the new road and watch out for the hash sign on the right hand side of the road just after the big klong before the bend leading up to the True Moves Tower, then take a U turn and come back about 850 m and turn left etc.

Sunday's HH3 run was last week allocated to Robocop (i.e., no one else put their hand up when hares were asked for) but no details have yet oozed out. They will be added to this post whenever they do!
Posted by Egg at 12:57 PM 1 comment: 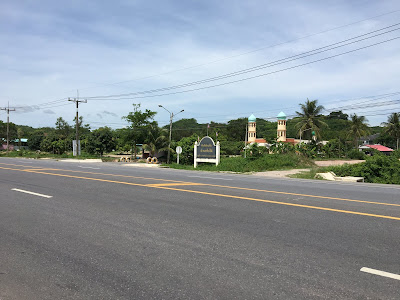 Songkhla Hash House Harriers' run #1978, Saturday June 8, 2019
Hare: Yardstick
Misdirections: From the Kao Seng intersection take the Old Yala Road south for 17.6km (6.9km from the NYR / OYR intersection at Ang Thong), then turn right into the concrete road just before the entrance to the small mosque (between the rubber tyres, as shown in the photo)
Proceed 2.7kms along the concrete road through the village following hash signs, then turn right and proceed for 500m to the runsite.  (7° 00.627'N  100° 38.582'E)
If coming from Hatyai, the preferred option is to proceed along the New Chana Road (Route 43) for 20.6km from the Khlong Wa intersection (overpass), or 7.8km from the Phichit Road junction. Turn left at the SH3 sign for 2.8km along the concrete road, then turn left and proceed for 500m to the runsite. This will avoid everyone going through Chanong village. 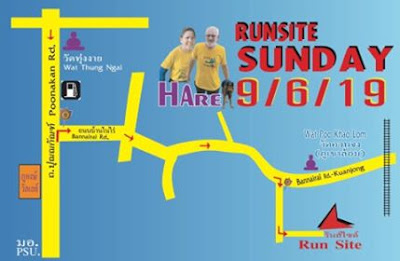 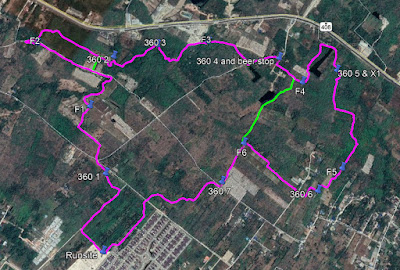 Here, for those who stuck to the hares' carefully laid plans for run #1977, is what they would have done on Saturday afternoon, give or take a few odd random walks as the GPS did not actually accompany the hares on the long-run lay for reasons which do not need to be gone into and are in no way related to the  age of the hares, one of whom is not even 50 yet! And most long runners did stick to the trail, which would have taken them about 8.3k to complete or for the short runners, about 5,5k with neither group having to go above 50m at any stage nor in total to ascend more than about 65m. 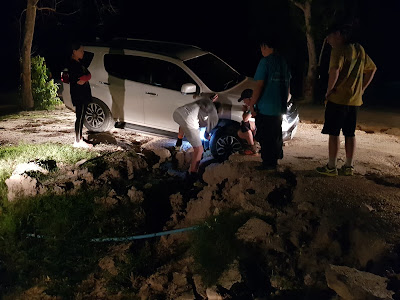 But there are times when it is not quite so advisable to follow the hares, particularly if your impression of exactly where they are going is not completely accurate. So when Palm Job wandered back to the runsite a few minutes after departing it sometime around 8 p.m. mumbling incoherently about having followed Egghead into a ditch, lo and behold, Egghead was not actually in the ditch, having sensibly departed via the road which Palm Job had somehow managed to avoid thus coming to grief. But help was on hand in the shape of the remainder of the hash, who, with the assistance of some local help, managed to extricate the Fortuner with minimal damage to the car at least, although apparently Palm Job's wallet took a small hit! Thanks to the unnamed locals, most of whom were apparently from Myanma, Yardstick, Lot Rakaa, Not the Full Shilling, Worm and of course our beloved GM, All Black who oversaw the whole operation and recorded it for posterity, for being on hand to help.
Posted by Egg at 9:54 PM 1 comment: