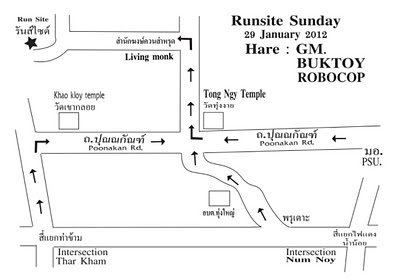 Or: from the Ko Yo intersection take the old Hatyai road for 4.7k turn left for 8k turn right at Wat Khow Kloy for 5k, turn left and go 1.5k and look for the living monk.
Posted by Egg at 6:12 PM No comments: 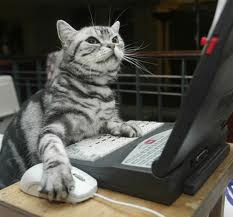 This week's SH3 run is the postponed-pussy run from 2 weeks back and takes place from a run site in the middle of nowhere on the other side of the new Yala road. Full details are:
Songkhla Hash Harriers' run # 1599 Saturday 28th January 2012, 4:00 p.m.
Hares: Pussies and doggies
Misdirections: From the Ko Yo intersection take the new Yala road for 3.3k and turn right along the track for about 300 meters to the run site located around a fork in the road.

The following week will be run #1600. Attempts by the rump of the committee who were unable to avoid meeting in Daeng's Bar last week to work out what we would do to celebrate, resulted in some positive apathy being expressed the following day by the masses as to the whole idea of another party so that idea seems to have been shelved. However the possibility remains open of some kind of an on-after next weekend so anyone with any good ideas speak up on Saturday and you will be placed in charge of organizing the whole venture.

Also up for grabs is the planning for the putatitive trip to KL later this year. Everyone seems to have different ideas at the moment so it needs someone with a bit of firm leadership to take the reins of command and tell us all what to do. Dogs need not apply as they are harram in Malaysia.

HH3 have not communicated any details about where we will be running on Sunday, but no doubt that will be announced on Saturday. Also up-coming is the next full moon which hits the skies on Tuesday, 7th February. We ought to run this month as we missed out in January Any volunteers to set a run?
Posted by Egg at 1:14 PM No comments: 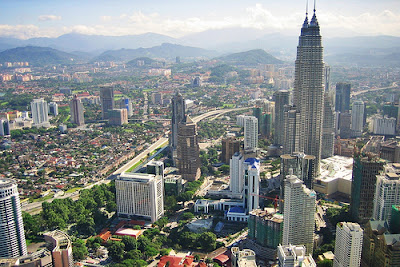 The idea of a Songkhla Hash visit to KL next year has been mooted as an alternative to doing another full-blown hill walk this year. The idea would be to try to run with both Batu Hash as well as KL Full Moon Hash as over the years they have probably been our most regular visitors. March or April have been suggested as being a good time with the walk bit of the trip being in the .

I’ve been looking at the Batu and KL Full Moon web sites and Batu Hash run on Wednsday (evenings) and KL Full Moon run on the closest Sunday to the full moon, so in March and April, their runs are on the 11th March and 8th April.

If we were going to try to take in both runs there would be two options, either traveling down from Songkhla very early on Sunday to hit the KLFM run first, then going to the Cameron Highlands for some walking on Monday and Tuesday, then returning to KL on Wednesday for the Batu run and returning to Songkhla on Thursday. That would be a 5 day trip. The alternative would be a 6 day trip, travelling down on Wednesday for the Batu run, spending 3 days in the Camerons then doing KLFM on Sunday and returning to Songkhla on Monday.

If we opted for the 5 day trip that would mean either March 11th-15th or April 8th-12th (which would mean we would get back right on time for our Songkran run the following day).
The 6 day trip would be either 7th-12th March or 4th-9th April. Both of these options would seem to rule out the train trip down, unless we set off a day early, although I have to say I am not actually aware of what time the train leaves Hatyai and arrives in KL.

I mean, have you any idea of what you get by Googling that title? Even with the ultra-safe filter on, it's still pretty gob-smoting for an innocent young mind. So no Sticky piccies this week!

But that doesn't detract from this weekend's offering which sees our senior FRB joining forces with his ageing mutt and next year's GM elect (Try and work out which is which! Hint: my money's on the one with the cold wet nose) to try to prove that there's life in the old haunts yet.

SH3 run#1598, Saturday January 21st 2012, 4:00 p.m.
Hares: Stick Insect, Yardstick and Pak Ma
Misdirections: From The Kao Saeng intersection take the Hatyai road for 3.5k and turn left. Follow the road for 500m to Wat Kaow Keow and park in the school yard on the left.

Sunday's HH3 run is being set by Toa Ngoc, etc. from waaaay down Poonakan, after the football field but before the Channel 9 satellite dish, on the left in their upper class moobahn. Official directions may follow but the best estimate is that it's: old Hatyai road, 4.7k; left 8k, right 5k and look for a sign on the left.

Finally, those of an astute frame of mind will have noticed that the next glorious milestone in SH3's relentless bid to survive into the foreseeable future will arise in 2 weeks time when we hit 1600. These things are normally marked in some way and the committee are working day and night to organize an exciting and memorable event.....well, put it this way there's a meeting at Daeng's Bar tomorrow (Friday) night at 7:30 p.m. at which ideas as to how this suspicious occasion should be commemorated will be aired (as in hot air). Now attendance is strictly on a need to be there basis, which means that everybody is welcome, even if only to drink a beer or two while the finer intellects of SH3's mismanagement cogitate and drink more beer than is good for the decision making process.

Beaver, Softy and the Wursts have already sent their apologies, so it could be a lonely night in store for the rump of the committee. Over to you GM (or GM elect - woof! woof!)
Nuff said? 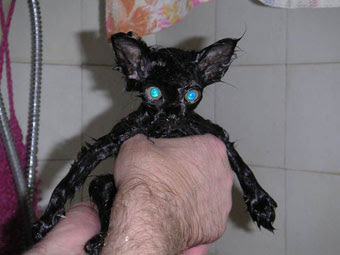 Ok, Ok! I know what you're thinking. But two significant facts account for the title of this weeks fact filled post:
1. It's still raining and has been for most of this week; and
2. It's a pussy run this week.
The weather conditions also account for the slight uncertainty about the precise location of the run, though all will no doubt be clear by the time you get to within  brake-screeching distance of the run site, the details of which are:

Hatyai H3 on Sunday are in buffalo country. Misdirections are to go to the Nam Noi traffic lights (old Hatyai road 10k) and turn right, then to go about 750 meters and turn left, then follow the road for about 1.5k to the run site on the edge of the abyss. The hares are Ouab Im and Vaseline. 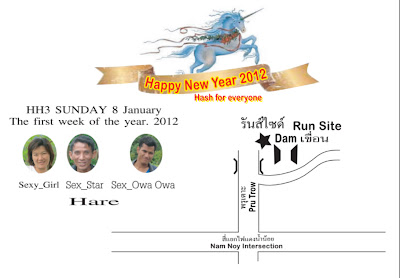 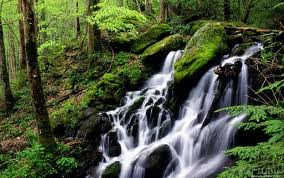 Is it working yet?
No, obviously not, because in the absence of volunteers to set this weekend's first run of the year, autopilot has been dusted off and will do it's thing on Saturday aided by last year's leading hares... who are (as if you didn't know) Harram and Pink Floyd who notched up 15 lays each with White Meat just behind on 13 (look, she's a blonde ok? and sometimes she just doesn't feel like going out and getting all mucky!) Anyway, initial reports are that it's a pretty spectacular run with some dramatic aquatic scenery even if bits of it might have been familiar had the pack not baulked at the hill on the last-but-one Kii Leum/R2D2 effort.
Details are:

Hatyai H3's whereabouts on Sunday are approximate: somewhere in the general area of the Or Bor Tor or the chicken farm at Pru Toh: From the Ko Yo intersection take the old Hatyai road for 10k and turn left at the Nam Noi traffic lights. Go about 3k and start looking for a sign on the right then follow signs to the run site. The hares are Sex Star, Sexy Girl and Sex Au Au.

Ok, back to the meditation: