No, no, not how long, Kao Long! As in:
Songkhla Hash House Harriers' run #1930, Saturday 30th June 2018, 4:30 p.m.
Hares: Egghead and Harram
Misdirections: From the Kao Seng intersection take the old Yala road for 11.8k and turn right. Follow the road past Wat Kao Lam, across 2 sets of crossroads and through a small village, for 4k then turn right onto the road heading towards Kao Long. Go 1.2 k and turn right into the run site at 7.050107° 100.613607°. From Hatyai, get to the Tha Kham crossroads and head east towards the big tree for about 5.5k then turn left on the road heading towards Kao Long (under the new temple arch). Go 600m. and bear left at the Y junction then go on for a further 1.2k to the run site on the right.

Sunday's HH3 run is from the putative housing development near Thung Ngai School: from The Ko Yo intersection take the old Hatyai road for 4.7k and turn left for 8k then right at Wat Keow Kloy into Poonakan for  about 5.8k and turn right. Follow the road to the right at a T junction after 300m, then swing left past Rong Rien Tungnai for a total of 700m. Then leave the road into the rubber on the track to the left and follow it to the run site at 7.011608° 100.532303°. From the bottom end of Poonakan the turning is 5.2k and on the left which seems to make it remarkably conveniently placed for the GM who is being spoiled these days! Map below: 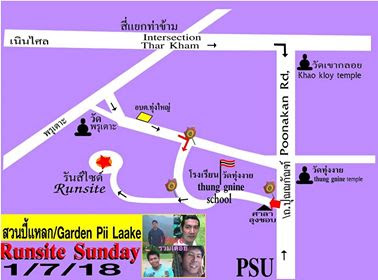 SH3: the afternoon after the night before 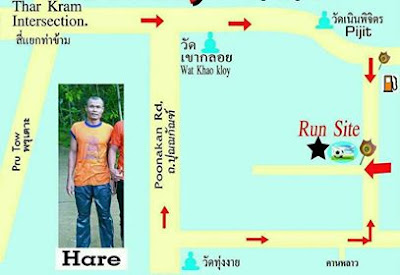 After their excellent 900th run today, HH3 have generously donated their regular weekly slot on Sunday to SH3 so that this Sunday's run will be:
Songkhla Hash House Harriers' run  #1929, Sunday June 24th, 4:30 p.m.
Hare: Ru Man Kap
Misdirections: From the Ko Yo intersection take the old Hatyai road for 4.7k and turn left for 12.2k (passing Wat Keow Kloy at 8k and Wat Nern Pijit at about 11k in the process) then turn right for 1k to the run site on the football pitch on the right. Pretty much everybody who was at the HH3 run today has said that they will be coming along, so if you didn't make that try to get to the SH3 run to keep all those good vibes from this afternoon's run vibrating. 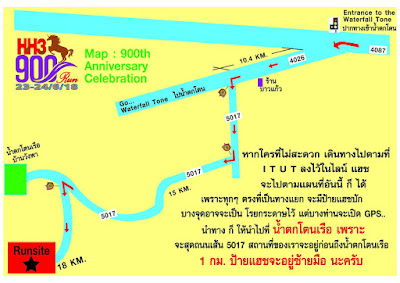 SH3 will be taking part in the HH3 900th run celebrations this Saturday, June 23, 2018, run starts at 3:00 p.m. (or to be advised) so there will be no run in Songkhla as such but the location of the HH3 run, which is close to the Wang Pa waterfall is shown on the map above.
Some caveats:
Any questions?

It also seems likely that there will be a regular HH3 run on Sunday June 24, with the location yet to be confirmed (although when last heard it was a toss up between the football field at Tung Ngai and that at Nern Pijit. More details on Saturday or they will be posted here later.
Posted by Egg at 5:13 PM No comments: 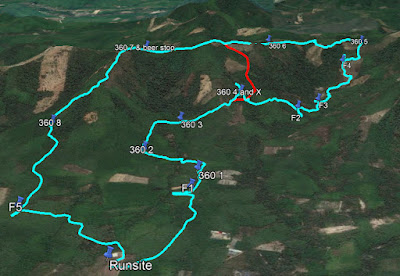 ...but it pours! HH3's run yesterday was held in conditions that would have been more appropriate for Manchester, or Melbourne maybe, as the temperature plummeted to the low 20's and the rain fell like... well like rain.

Half an our before the advertised start it was so heavy that the run site had to be moved onto the concrete football pitch and that move and the usual need to wait for still more runners delayed the start to almost 4:30, much to the concern of the hares. But all was well and probably because everybody knew more or less where they were going to be going, most of both the short and long runners were at the beer stop in about an hour, in good time to be able to get back to the run site before dark.

The known exception at that stage was Mr. Bean/Beanie so the hares set off in the Egg-truck in search, finding him almost back at the half way point standing by the side of the track looking confused and mumbling incoherently (ok, he was speaking Thai!) about four more people, who turned out to be not long runners as would be expected, but short runners, including Sexy Cop who had been reported to be safely back at the run site and Sagai who had apparently baulked at the hill and decided that as the long run was not going up it, they should follow that, little suspecting that the cunning hares were just delaying the inevitable climb. All five were loaded onto the back of the truck and transported back to a very damp run site.

For the record, the long run was 8.1k or 9k with the F's and the single X and ascended 279 meters in total getting up to 222m. The short run had a bit less ascent but still maxed at 209m at the beer stop and covered about 5.7k all in including a couple of the F's.

The evening ended with Ban Sai Kao's ditches (yes, Ditches) claiming another victim as Inchdick, possibly because he had former victim, Lady of the Lamp sitting in his truck, managed to get bogged down just north of the run site, eventually being pulled clear by the Egg-truck after some Heath-Robinsonesque methods employing rocks, planks of wood and a jack managed to free the vehicle from its bog. But once again the good people of Ban Sai Kao turned out to help as they have done on at least one occasion before.
Posted by Egg at 3:36 PM 1 comment:

Glad tidings from the hare:
Songkhla Hash House Harriers' run #1928, Saturday June 16, 2018. 16:30.Hare: Gan YaoMisdirections: From the Ko Yo intersection take the new Hat Yai road for about 8.6km. Turn left by the hash sign onto the blacktop road. Go for 250 meters and turn left by the sign, go 440 meters and park by the hare's Toyota Starship.'Cause it’s such an idyllic spot some days the mozzies like it here too, so bring some repellent if they bother you.Runsite is at: 7°06’09.15”N 100°31’02.40”E
From Hatyai this is probably best approached from the Nam Noi traffic lights. Turn left and go 6k and the hash sign will be on the right. If you need to come down Lopburiramesuan road, then look for the sign next to the opposite carriageway on the turning before the hill/True Moves tower than go 2k and do a U turn and come back 2k to the turning on the left etc. 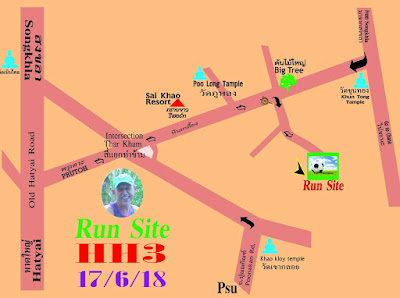 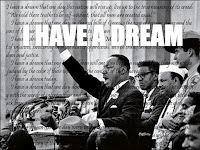 Ok, so C-in-a-H has invoked MLK, so let's use him as our inspiration this week....
I have a dream hashers and harriets, that this will be the week when all those people who keep saying that they are going to come back to the hash will wake up tomorrow morning with a new sense of purpose and fill the run site with cars to overflowing. I have a dream that every valley shall be exalted, every hill and mountain shall be made low, the rough places will be made plane, and the crooked places will be made straight
....but then that's up to the hare! Details are:

Sundays HH3 run is being set by Robocop and unless anything has changed since last weekend will be from the football field at Tungnai (Poonakan, 4.5 k from Wat Keow Kloy. 6.5 k from the Kanjanawanit Rd traffic lights or about 2k from the GM's apartment! For anyone who has not been to HH3 recently, you might be surprised to know that attendances are pushing 70 these days with a big influx of new runners so it would be really nice if we could do the same thing at SH3 (Hint! Hint!)
Posted by Egg at 8:19 AM No comments: