Saturday's SH3 run details are:
Songkhla Hash House Harrier's run #2003, Saturday, November 29, 2019, 4:00 p.m.
Hares: Egghead and Dor Yoi
Misdirections: From the Ko Yo Intersection take the old Hatyai road for 4.7k and turn left for 8k to Wat Keow Kloy then turn right into Poonakan Road for 1.2k then left for 500m to the run site just off the concrete road on the left at   7.019134° 100.568892°. Click here for Google Maps' pin. From the other end of Poonakan, the turning is at about 10k and on the right.
Sunday's HH3 run is being set by a cast of thousands apparently including some if not all of the China-Doll/Double Door/Boner/Cracker axis plus Sound Chef and others not readily identifiable from the picture in the map below. The run site is in the road leading up to Khan Lao - from Wat Keow Kloy take Poonakan for 5 km and turn left just before Wat Thung Nai  (or if coming from the PSU end, the turning is on the right at about 6 km, just after the wat). Follow the road for about 3.5k and turn right at the hash sign then follow the road until you see signs of a run site. 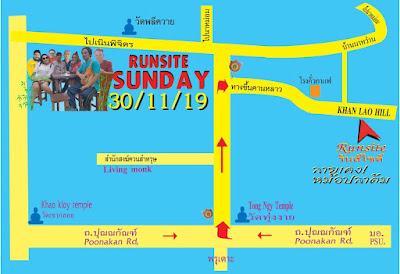 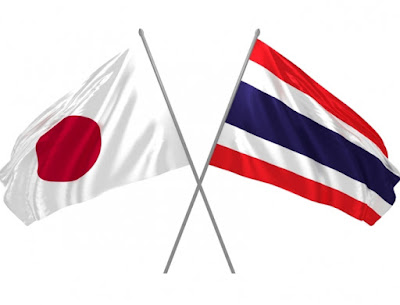 In a first for SH3, Saturday's run is being set by one hare firmly located in Thailand with the other two being either in, or on their way to Japan! Details are:
Songkhla Hash House Harriers' run #2002, November 23, 2019, 4:00 p.m.
Hares: Not the Full Shilling, Worm and "Jim", aka, Kai Ping at HH3.
Misdirections: From the Ko Yo intersection take the old Hatyai road for 10k to the Nam Noi traffic lights and turn left for 3.6 km, then turn right just after Wat Prutoh for 750 m. Turn left for 1 km then right at the hash sign for about 250 m and cross the earth bridge on the left to the run site at 7°01'54.8"N 100°33'10.7"E. Click here for Google Maps' pin. If you are coming up Poonakan from the PSU direction, take the left turn opposite Wat Thung Nai at about 6 km (or if coming from Wat Keow Kloy, the turning is on the right at about 5 km) and go 3.5 km along Th. Prutoh-Thungnai, then turn right for 1 km etc.
Sunday's HH3 run is being set by Robocop: from Wat Keow Kloy take Poonakan for 5 km and turn left just before Wat Thung Nai  (or if coming from the PSU end, the turning is on the right at about 6 km, just after the wat). Follow the road for about a kilometer and look out for the hash sign on the right then follow the track etc. to the runsite. Map below. 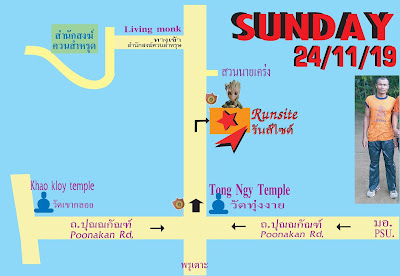 A tale of two runs 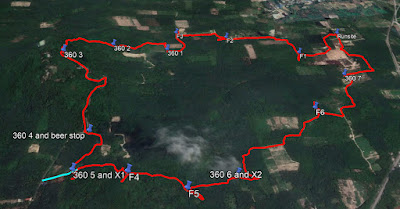 Here is a picture of what those who came along to SH3's run #2001 on Saturday enjoyed, a pleasant 7k or so with a couple of modest hills including our first ascent of Kao Long for a few years and trails neatly manicured by the hare to ensure a pleasant, non-life-threatening experience. The long run got up to about 175m with a total ascent of about 230m. The short runners meanwhile were split with some doing the first half of the long run ending at the beer stop and the remainder being ferried out to join the second half via the blue stub above, both doing about 3k and all being back home well before dark. 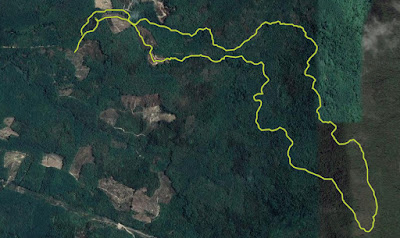 In contrast, above is the trail from Sunday's HH3 run as recorded by Kai Ping (slightly retouched to accommodate the fact that his watch didn't kick in for about the first kilometer - spot the joins if you can!) or if you prefer a less cluttered picture, here is the contour map of the run: 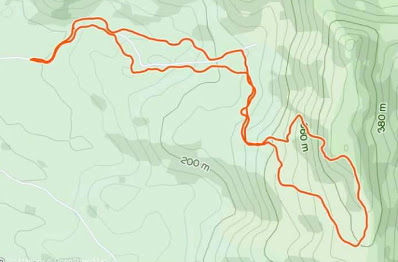 Ah, but I hear you say, they are not the same! And you would be correct since the top picture is of the long run (about 8k, total ascent 422m, highest point recorded 453m) while the bottom picture is of the "short" run, courtesy of Kii Loeii (about 7k, total ascent 403m, highest point recorded 459m - actually the same point as on the long run!). With the start being slightly delayed by someone's car getting stuck on the rutty road to the runsite, the run did not actually start until after 4:15 and it took even the fittest long runners almost an hour to reach the top, with others from both runs arriving any time up to about an hour later. That meant that only the leading half of the long run were allowed to complete the run as set since the somewhat otiose section which departed from the track to take in a river gorge was deemed to be too dangerous to attempt after dark - probably the most sensible decision taken all day by the hares! The upshot was that most of the short run and many of the long runners were still making their way down the hill when darkness fell and the final group did not arrive back at the runsite until well after 7 p.m. Full marks for their perseverance but should it have been necessary?

Long tough long runs are fine - if you deem yourself to be a long runner then that is the challenge you accept from time to time. But short runners really don't expect to have to be struggling home down a 450-meter hill after dark, nor for some of them to have spent the thick end of 2 hours to climb it in the first place. There were some fairly obvious rumblings after the run had finished among the short runners about no warning having been given of what was in store and it's probably fair to say that had they been given such a warning they would probably have not embarked on the run in the first place!

But on the positive side, the view from the top was spectacular, the trail down pretty nice and happily we were blessed with great weather again which at least meant that none of the more difficult sections of the hill were attempted in the rain. But maybe, just maybe, there is a need for a reaffirmation of the purpose of short runs - to offer a kinder gentler experience to those who don't want a full-on combat-scale hash and come along for a pleasant outing where they can safely take selfies and not get stuck up mountains after dark!

Over to you madame GM!
Posted by Egg at 2:13 PM No comments: 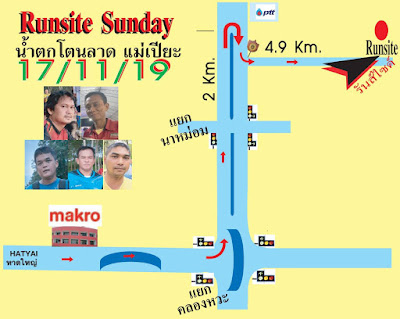 All change this Saturday, since with Yardo's impending departure to do unmentionable things in Oz, SH3's answer to HAL 9000 has taken over and will set this weekend's run. Details are:
Songkhla Hash House Harriers run #2001, Saturday November 16, 2001, 4:00 p.m.
Hares: Egghead and Harram
Misdirections: From the Ko Yo intersection take the old Hatyai road for 4k and turn left at the Kuan Hin traffic lights and stay on the main road for 6k. Turn right for 300m then follow the road round to the right for about 80m to the runsite at  7.066283° 100.604885°. Click here for Google Map's pin. From Hatyai the Kuan Hin traffic lights are 10k past the Nam Noi traffic lights and the turning is on the right.
Sunday's HH3 run, last we heard, was to be set by Nong Golf and will be somewhere across route 43 in the Na Mom area. More details here when they arrive.
Posted by Egg at 9:44 PM No comments: 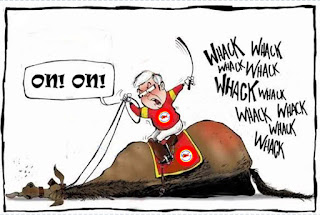 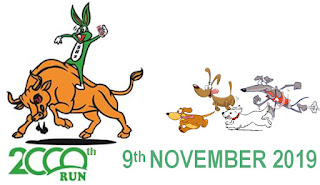 Remember October 2017? When SH3's very existence seemed to be in doubt and the only person confident about it was Sex Sprinter who was looking forward to run 19000? Ok, so we are not quite there yet, but SH3 has reached the milestone of its 2000th run with some aplomb, thanks to a combination of solid support from our traditional runners and the invaluable support of HH3, who have made sure that there is life in the old bull yet.

Saturday's milestone will be celebrated with a special run followed by a party at the Thung Jaeng Restaurant on the new Yala road (7°05'12.7"N 100°37'24.1"E or click here for Google Maps' pin). The runs are slated to start at 3:30 p.m: the long run will be set by Buck, Egghead and Lot Rakaa and will be an A-B, with the transport leaving Thung Jaeng at about that time. The short run will start and finish at Thung Jaeng and will be set by Sex Sprinter, Buk Toy and Only a Yolk, so the start will be a little later than that to accommodate any late arrivals. Both runs will feature sponsored beer stops: the short run by HH3 and the long run by the Full Moon Hash.

The circle will follow the end of the two runs with dinner timed at 6:30 and there will be facilities available to take a shower provided by the restaurant. Then it's party-party-party! With karaoke and party games and all the beer you can drink.

If you haven't already registered then you can do so on the day, but at this stage the chances of getting your choice of T shirt are pretty slim as we are already almost at the 150 cap which was declared for registrations. We will do our best to accommodate late regos but it may take us a while! Meanwhile those who have registered include all your favorite hashers from SH3 and HH3 plus a generous contingent of runners from other chapters in Thailand and overseas and some SH3 runners from way back when, with whom to renew old friendships.

One more word about Saturday's run. As things stand there will be no transport from the Hot Bread Shop to the runsite as both the Beer Truck Driver and the Beer Butch will be going to Thung Jaeng early and not via the HBS. So could anyone who needs transport to the runsite from Songkhla please add a comment to this post or let Egghead know in advance and we will get something organised.

Sunday's HH3 run details will no doubt emerge in due course and will be posted here later.
Posted by Egg at 8:39 PM No comments: