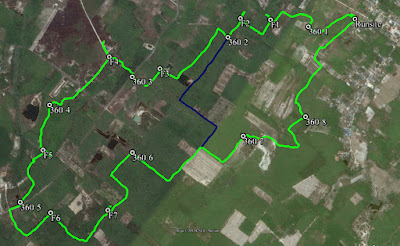 Whatever way you look at Hatyai H3's run last Sunday, it was pretty flat. With a maximum height of 55m from a starting point of 27m, the runners ascended only 44m round the whole 8.1k (or 7.6k if you're Beavershot) which probably accounts for the fact that despite 15 O's and F's the first runners were home in just under an hour. The 4.4k short run was set live by the hare who found it pretty difficult to stay ahead of the SRFRB's and once the long run paper was rejoined, they disappeared leaving Egghead and Big Jelly Cock to bring up the rear in about 50 minutes.
A party ensued which strangely no one has been able to tell me anything about, and judging from the volume of aluminium cleared up on Monday that is not surprising. Thanks to all who made Yolk's Pokes' birthday such a memorable evening; now what are we going to do next weekend?
Posted by Egg at 7:19 AM