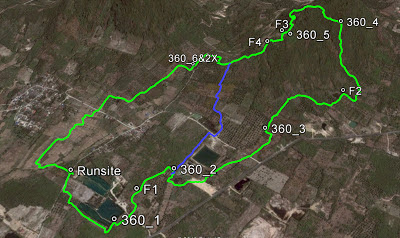 The trend towards SH3's short runs hitting the spot, while the long runs are greeted with mild disdain continued yesterday as the long run was judged to be too long (6.3k, 1hour-13 minutes) and to have been marred by the section at the top of the hill being "a bit rough" with the check that followed it being too difficult. Meanwhile, the short run at 4.1k was enjoyed by everybody except Ma Mick who despite having only 3 good legs, slipped his minder and made a valiant attempt at joining the long run before being captured and forced to accompany the hare.
So next week, just to enliven things (and not just because we have no hare!) there will be another relay hare run, followed by dinner at Thung Jaeng for those who are up for it. More news in the week.
Posted by Egg at 7:00 AM