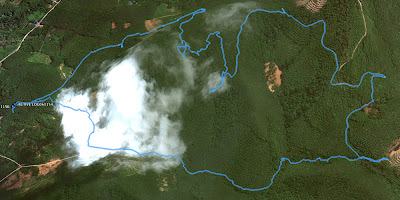 Stats: 7km long, 350m ascent, 217m at its highest. The highlight was half a kilometer of fairly primeval stream bed, which at least one hasher (Mii the Dog) refused to descend. A bit of drama was added by rain and impending darkness before everyone got back. But only one runner really went missing, and even he reappeared not long after dark, by which time about four search and rescue people were still out and unaccounted for. The long-run hare PO'ed early, claiming some sort of excuse. Bogus, but it beats sitting on ice on a cold dark evening . . . if there was even a circle?
Posted by Beavo at 8:01 PM