1637: mostly normal with patches of madness 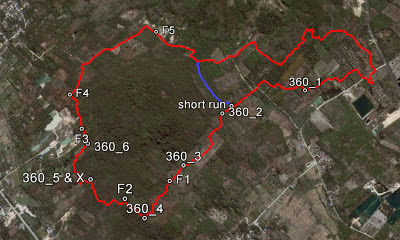 Laid on Friday afternoon between deluges, after a single recce the previous day, which took a rather more confrontational position vis-a-vis Kao Wong,  if it is remembered at all our memories of 1637 will probably consist of a blurred image of a downhill slide after the 5th check culminating in a banana patch followed by a swamp, which was hurriedly inserted to avoid the confrontation with the hill which had occurred on the recce, and perhaps some confusion about the in-trail which only Kii Leum can explain! Otherwise, there was plenty of familiar running for the fit and willing and a nice view as you came back from the 2nd F. The distance was recorded at  6.3k, probably a bit more if you did all the F's, with the top point being a modest 140m at the view point and a total ascent in the low 200's. Low point was the balance between hares (5) and hounds (5) on the long trail. But there were 7 short runners; are we missing something here? (Gan Yao is not allowed to comment on this in case he tells the truth!)
On on! to the birthday run, next week which is at the Thung Jaeng Restaurant (new Yala road, 9k on the right); be there at 3:30 p.m. for transport to the A site and a run which starts at 4:00 p.m. Regular SH3/HH3 runners 60 Baht; guests etc.make a case and be charged accordingly!
Posted by Egg at 7:14 PM