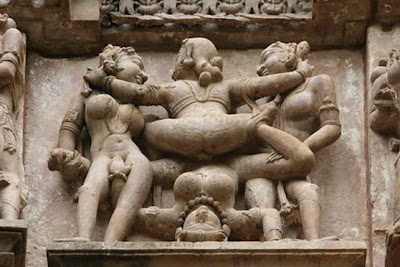 If you wonder why Gaseous looks so slim, trim, and smiling these days, maybe the answer can be found in this article in yesterday's New York Times on the connection between yoga and sex. Yoga of course began as a sex cult, and now science is beginning to prove that the Tantrics had a few things right. An excerpt:

. . . over the decades, many have discovered from personal experience that the practice can fan the sexual flames. Pelvic regions can feel more sensitive and orgasms more intense.

Science has begun to clarify the inner mechanisms. In Russia and India, scientists have measured sharp rises in testosterone — a main hormone of sexual arousal in both men and women. Czech scientists working with electroencephalographs have shown how poses can result in bursts of brainwaves indistinguishable from those of lovers. More recently, scientists at the University of British Columbia have documented how fast breathing — done in many yoga classes — can increase blood flow through the genitals. The effect was found to be strong enough to promote sexual arousal not only in healthy individuals but among those with diminished libidos.

In India, recent clinical studies have shown that men and women who take up yoga report wide improvements in their sex lives, including enhanced feelings of pleasure and satisfaction as well as emotional closeness with partners.

At Rutgers University, scientists are investigating how yoga and related practices can foster autoerotic bliss. It turns out that some individuals can think themselves into states of sexual ecstasy — a phenomenon known clinically as spontaneous orgasm and popularly as “thinking off.”