The first run of a brand new era

Ugh! Let's get that piece of bad taste off of the top! 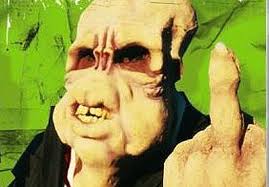 That's much nicer!
Anyway, to business. This weekend's brand new revitalized if financially adrift SH3 present an almost brand new, only used once  (or twice) before runsite and a more or less virgin (as far as anyone is these days) hare. Ok, so it's actually Beavershot again, but he is now the official Beavershot wearing his brand new OnSex hat, which is more than can be said for those two... words fail me... down below. So as last week, the details are:


Songkhla Hash House Harriers run  #1603, Saturday  25th February 2012: 4:30 p.m
Hare: Beavershot
Misdirections: From the Ko Yo intersection take the old Hatyai road for 4.7k and turn left for 10k then turn right and follow the road/track for 1.1k to the run site in the middle of the rubber.

Sunday as correctly predicted last week will feature the almost brand new SH3 trailmaster setting almost his first run for HH3 for almost the first time from near the Sai Kao Resort. (From the Ko Yo intersection take the old Hatyai road for 4.7k and turn left for 6k then left for 4.5k to the run site on the left.) The run starts at 4:30, or earlier if the mood takes us.

Now who's going to be Hash Cash, I wonder? Perhaps the nice man with the upside down nose might be interested.