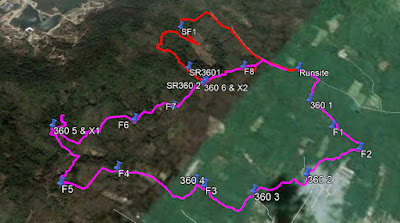 The 2018 pussy birthday run presented a strange combination of statistics with the long run only exceeding 70m if you were unlucky enough to find some of the more extravagant Fs and Xs and the short run doing the hill thing and getting up to about 145m, while not breaking the 3k barrier horizontally. The long run was about 6.8k without the checks and for most of the run the whole pack were within hailing distance of each other although that all seemed to change after the fifth check and the first check-back. Good turnout again though despite a few notable absences with everyone bar the beer truck driver either setting or running one or other of the runs and some great food from our celebrity chefs including the newly named "Jim not Jim" or however we are going to spell that one!
Posted by Egg at 10:55 PM