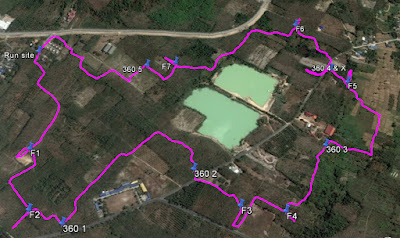 A creditable turnout yesterday in the absence of some but not all of the Thai persuasion, and bolstered by the return of Totally Inadequate and his son, Mot, who probably wasn't even walking the last time his dad ran with us! The hare took the one-run option to avoid having to go out and lay a short run (actually he forgot to bring the paper, so opted to sweep instead!) but in the event, all but one of the short runners made it round the whole run, which All Black measured at 5.1k, well before dusk. The exception was Only a Yolk, who based on local knowledge, walked up the road from the first 360, only to get led astray by the only X at the 4th 360, from which she rejoined the run via crawling under some barbed wire and discovering the remains of a  recently deceased leopard cat in the process. Meanwhile, Eightball and Totally Inadequate managed to finally annoy the tethered bull out on the rice paddies, enraged by the long runners, into freeing itself from its moorings, from where it made a vain attempt to skewer Chao Ngor who was unphazed by the experience and later went on to put her life at risk for a second time by climbing the tree at the run site bearing some inedible fruit which no doubt possessed important medicinal properties.

HH3 today? The best that can be said is: Dam! Pru Toh! Which probably means that going to the Nam Noi traffic lights and turning left (from Songkhla - right from Hatyai) then looking for a sign on the right after about 1.5k will probably get you in the right direction. The hare is Robocop so a map would probably not help!
Posted by Egg at 12:49 PM