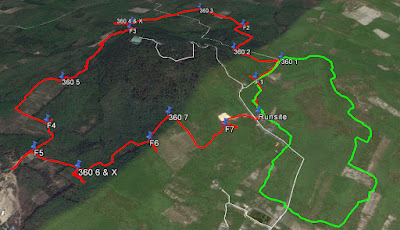 Well, that's what the new sign calls it - or maybe it's Kao Loong, but late in the evening after a few cans of golden nectar it's easy to be fooled.

Anyway, Sunday's HH3 runs above. The long run was probably under 6k, but expanded itself to it's full length of 7.2k with all the F's and X's added in. The short run was about 3.1k. Both runs got up above 100m, the long run only if you followed the paper out to the third F, the short run at the top of the little hill not long after the first (and only) 360. Total ascent on the long run was in the region of 250m with about half that for the short run.

Everyone was back in time to enjoy the convivial atmosphere before the circle, although the circle itself got a bit serious as the hash debated the merits of becoming troglodytes on the next out-station and spending three days camping in a cave in Trang with no electricity and no sanitation. The alternative which seems to have been adopted is to spend three days sitting in the cave but then if you feel up to it after a few golden nectars, to drive back to local accommodation at night to get a respite from all that asceticism. Hmmm....
Posted by Egg at 9:03 AM