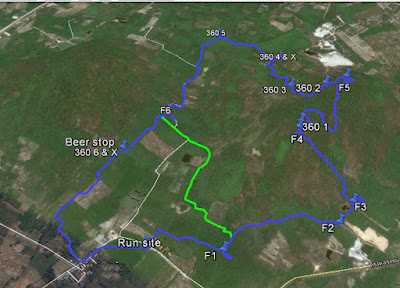 Here is the track for Saturday's SH3 run, which, whilst we don't do the competitive haring thingy, was comprehensively blown away by yesterday's Sex Printer/Toy Boy HH3 run, the track for which Beaver may or may not choose to share with us at some point this week. Meanwhile the SH3 run was 6.9k all in so probably less than 6k for those smart enough to avoid the F's. The short run was 3.1 k and was generally felt to have been too easy. The highest point at the holy end of the hill was 194m and the total ascent in the region of 300m.
Posted by Egg at 1:18 PM