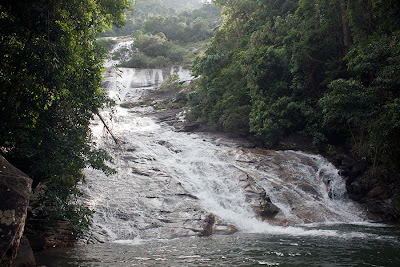 Click on this to see it big, and then look for the small pink figure bathing just below the dark rock near the bottom right . . . it's a not-so-small Scotsman.

So here's the tale of the adventure that followed Yardstick's unfortunate Evil Kneivel impersonation. (But first I must add a small correction to my respected colleague's post immediately below this one: the accident occurred not on the main North-South road but on the Phattalung-Trang road, about 500m before its highest point, i.e. the ridge that divides the two provinces. Those of you of a forensic bent are welcome to go up there and see the milestone, now broken and partly uprooted, that suffered the combined impact of Yardo's roo bar, the engine behind it, and the foot behind that.)

Anyhow, we took the victim to Piyarak Hospital in delightful downtown Phattalung, where the staff insisted on knowing his religion, apparently in the case of last rites. Being the sensitive, caring sorts that we are, we then simply carried on with the trip. Stick Insect had arranged accommodations at a resort at Ton Te Waterfall, which is on the west side of the Phattalung-Trang hills probably just a bit south of where we came out on the Khao Jet Yawd hillwalk. Apart from the fact that nobody was there and the place appeared to have closed up a year or two before, it proved quite satisfactory. 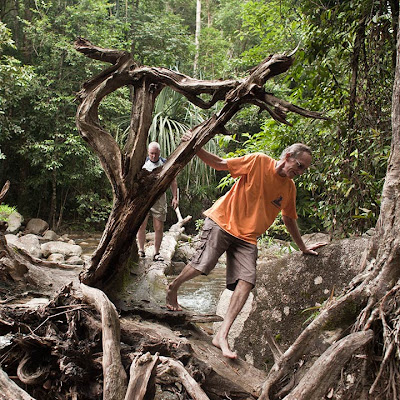 The main attraction here is the waterfall itself, which is fairly spectacular and includes perhaps the best natural swimming hole any of us had ever seen, right at the base of the falls. Three of our party (Stick, Bravefart, and me) carried on up the hill to almost 500m, where we found . . . uh, more hill. Anyhow, plenty of opportunity for hill trekking, and some nice rubber down at the bottom for possible hash runs. The resort has only 5 or 6 bungalows, but features a big grass lawn that would be ideal for tents. Anyhow, keep it in mind for a possible outstation run. I think all of us agreed that it's a kind of special place, really lovely and apparently undiscovered.
Posted by Beavo at 6:42 PM