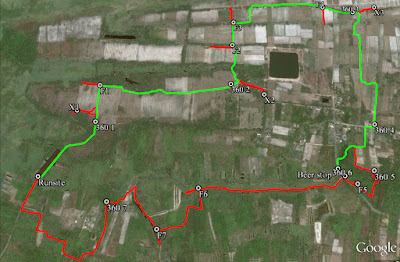 For our third outing this year on the wrong side of the tracks, the venue was slightly south and east of our previous two ventures into flatland so the ground covered was almost entirely virgin. The long run without all the Fs and Xs was measured by Mr. Garmin as 10k, or 7,7k if you ran intelligently and waited for the hare to break the checks. The total ascent was estimated as being well below 100m with the hill that separated the long and short runs being only 52m according to Mr. Garmin's friend, Google Earth, The short run was 4.4k and reached the beer stop at about the same time as the long run, and a number of putative short runners carried on and did the rest of the long run, as the beer-stop truck was full of dogs. Everybody who did got their feet wet, which the hare(s) blamed on God; Short Screw complained about being attacked by dogs, which is palindromically significant; but then it wouldn't have happened had he been on paper. Meanwhile, serial short cutter, Sex Sprinter pissed off early but was not on the ice list for short cutting  anyway, as he had had no idea where he was, so stuck to the paper.
The GM was notable (again) by her absence, soThrobbin' Hood stepped up and ran a rowdy circle, which celebrated Yardstick's birthday, as well as awarding Short Screw his 150 run T-shirt (17 years? - has he really only been to so few runs?) and allowed the assembled throng to insult the hares for their efforts.
Posted by Egg at 10:33 PM