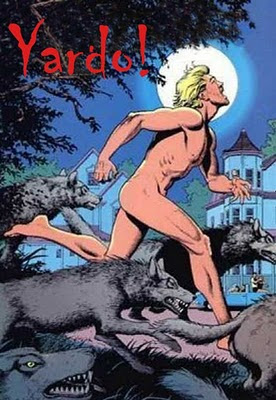 It's that time of the month again when the blood runs.....
cold, the flesh creeps and Yardo© rises from his crypt, howls at the moon and comes out to run with his pack.

And this month, Yardo is appearing in person at the Hatyai Full Moon Hash run which will take place tomorrow night (Thursday May 27th, 7:00 p.m.) at Prem's place (From the Ko Yo intersection take the new Yala road for 800 meters; turn left and go about 1k until you see signs of life, probably at the top of the hill outside the Home of Faith itself). Hare is Inch Dick, Yardo's mild-mannered alter ego.
Usual stuff applies: bring a handlight, some beer and some food to share if you feel that way inclined. Full Moon Special Brew will be on sale at 3 cans for 100 Baht..
AND... the hare suggests you come roughly on time or call someone to let them know you are on your way as this will likely be a surprise A - B run with transport provided from the run site to the A site around about the time we normally start running (7:00 p.m.).