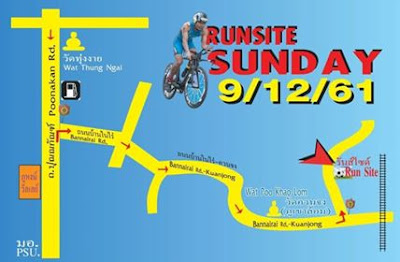 Tomorrow's HH3 run is from the Football field at Kuanjong, which for the uninitiated is at  6.975149°N 100.520453°E or thereabouts. If you prefer good old-fashioned hash directions, from Wat Keow Kloy at the top of Poonakan go 7.5k down Poonakan and turn left onto the Ban Nai Lai road. Go 3.5k and turn left for about 200m to the run site on the right. If you are coming from Hatyai, the Ban Nai Lai turning is 3.5k up from the other end of Poonakan at the corner of PSU and Kanjanawanit road. The hare is Robocop - the nice Robocop, not the formerly tyrranical unmerciful Robocop who used to destroy Monday mornings with his runs, but the gentle considerate lovey-dovey Robocop who only sets "wing sabai"s. Map above for the disproportionality tolerant.
Posted by Egg at 9:27 PM