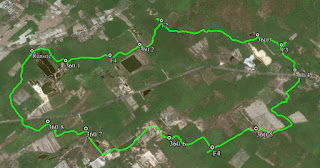 Since we're on a Japanese themed kick at the moment, this one looks a bit like one of those rice and fish thingies, or maybe it just looks like a slightly runny dog-turd - whatever your imagination does for you!
Anyway, it was measured by Beaver as 7.28k, had a maximum height of 55m and a total ascent of 92m. A fairly disciplined beer stop at the first road crossing didn't stop the FRB's from whizzing round in just under 1 hr 15 mins and even with a delayed start to allow Stick Insect to get to the run site, we were hoing into the beer well before the moon was due to rise at a quarter to nine.
A small but enthusiastic turnout including the Softy-Temp family for possibly their last full moon run and a good sprinkling of fit young things from Hatyai for whom beer is no longer effective in slowing them down. Masses of food courtesy of Temporary Relief, Handjob, Super Pig and Only a Yolk, beer courtesy of Buk Toy and the beer truck.
Posted by Egg at 8:44 PM